When Resident Evil 4 released in 2005, it was quickly recognized as a revolution in horror gaming. It was a refreshing new take on the franchise, basically defined over the shoulder shooting for the rest of that generation, and is widely considered one of the best horror games of all time. The game was also a graphical powerhouse, pushing the Gamecube well past what anyone could have expected at the time. 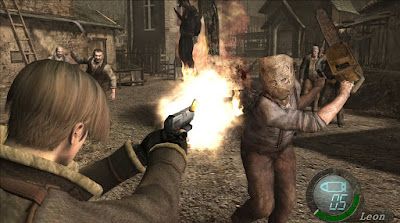 One of the most impressive aspects of RE4 was it's fantastic VFX design. Many of the fx still hold up when compared to more modern games, even later iterations of it's own franchise. I remember when I first saw RE4, I was blown away by how real the fire looked.

To this day, I still can't think of many games that can beat RE4 when it comes to fire. They've got all sorts of high-quality animated flame textures that they employ in their fx, most of them sourced from real fire footage. The sheer number of different fire animations impresses me, since it seems like they've got a different texture for each individual fire effect. They've got different ones for bonfires, for fireplaces, torches, incendiaries, lamps, you name it. It gives their fire good variety and a very natural look to it all.

You can see some more of their exceptional fire effects during this fight.

Another thing RE4 handles exceptionally well is blood. Blood is tough to get right, and a lot of games still have trouble rendering it effectively. It's either too shiny, too viscous, or simply too much. RE4 hit a sweet spot with it's blood fx, where there's enough to look gruesome, but it's subdued enough to avoid looking cartoonish.
Where the blood shines for me is in the designs of the particle systems. There are a lot of subtle intricacies in order to help the blood feel more tangible.
Let's take a look at one of RE4's most infamous scenes: the chainsaw death.

It's over in an instant, but there's a surprising amount of detail put into the effect. 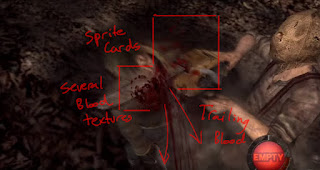 First you've got the initial grind of the chainsaw against Leon's neck. They've got a few sprite cards filling the area between the chainsaw and Leon, but they've also got trails of blood flying away, meant to emulate the spray of blood being carried across the chainsaw's teeth.

Next up, once Leon's head comes off: 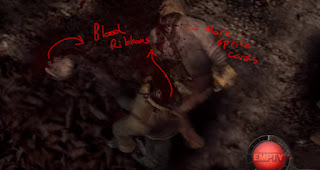 A neat little detail they added was ribbon particles spawning from both ends of Leon's neck to make it look like a stream of blood flowing as his body and head collapses. 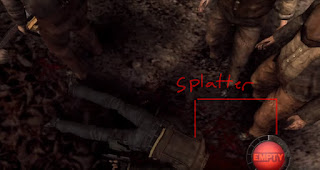 Once the body hits the ground, there's a nice big splatter that spawns at his neck stump 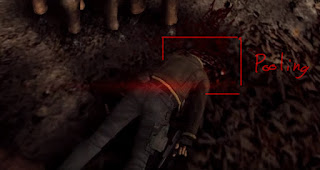 And lastly right before the "You Are Dead" screen shows up, you see blood pooling out from Leon's neck.
A whole lot of elements just for one sequence! All of which combine to make for one horrifying scene. I still feel like RE4's chainsaw death is one of the most effectively disturbing sequences in a video game, and much of that can be attributed to the detailed design of the VFX.
Posted by Valdis Matas at 2:25 PM No comments:

Been busy last couple months, kinda forgot about this. Though I feel like I could update it some more, still got stuff to say and things to show!

Here's some of the art I've done over the past while:

This was for a little April fools post we did for Insurgency. "Now announcing, Insurgen-Z" 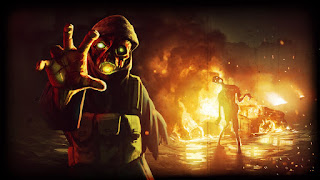 This is a cop for a little fiction I'm concocting. Tried experimenting with some different painting techniques.

And this is a quick mockup for a new level tileset in Due Process, the Drug Factory: 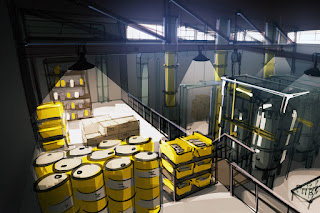 Some before and afters of the levels in Insurgency, showing some of the effects I did for them. 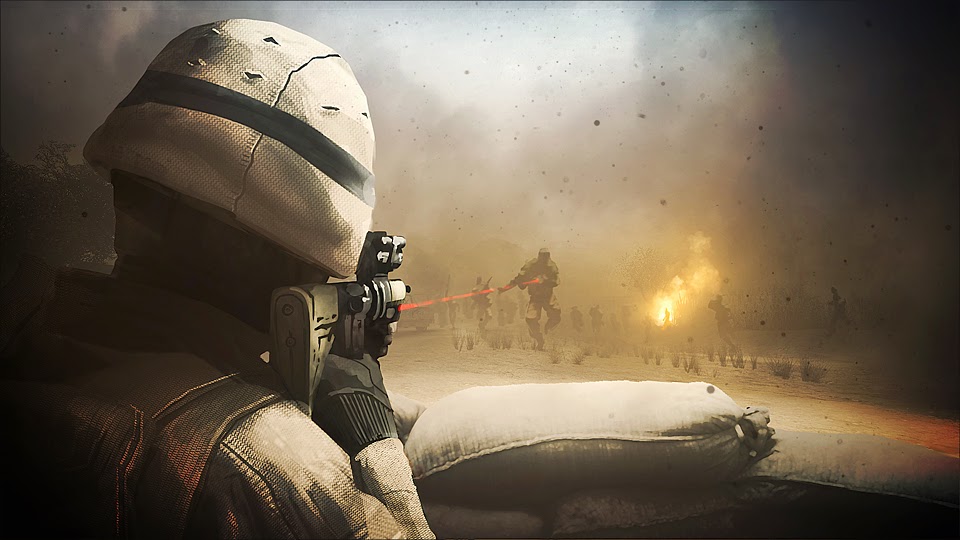 New header image I made for Insurgency for our next update. Had some fun doing this one, and I'm starting to speed up my process.

Material definition is hard.
Posted by Valdis Matas at 3:56 PM No comments:

Starting to work out what Due Process is gonna look like. This is only one environment set, we're eventually planning on more that take places in areas like apartment complexes, inside ships, etc etc.
Posted by Valdis Matas at 2:38 AM No comments:

Here's some gameplay from the shooter I'm working on with my friends, and an example of the pixelated particle effects I've been working on. Obviously the art is very VERY placeholder, I'm working on concept art for how the game's going to look.


Posted by Valdis Matas at 5:45 PM No comments:

Ok this is just amazing...

Posted by Valdis Matas at 1:15 PM No comments: